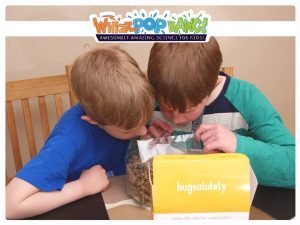 UK Kid’s science magazine, Whizz Pop Bang recently launched their “Foods of the Future” campaign, which supports the new and sustainable edible insect based food industry, by having families trying Cricket Pasta at home. Thanks to this campaign, 5 families in the United Kingdom were able to try something completely new. Right now, there are another 10 on the way, as Whizz Pop Bang decided to extend the tests, due to the awesome and inspirational success of this initiative.

The goal is to educate the next generation of influencers about the nutritional and environmental benefits of edible insects, and to start changing the preconceptions that comes with entomophagy. The campaign would allow them to try an edible insect product so that they may come to their own conclusions about whether or not they accept it, as they may well have to in the near future.

One thing became immediately clear: children (and their parents) are curious about insects as food. Playing their parts as scientists to a tee, their observations came rolling in.

“I cooked some of the pasta yesterday by boiling, draining, drying again (in a very low oven) and then deep frying to puff it up. The frying brought out the ‘nutty’ flavor very well, and the dry puffed crunchiness worked well – quite similar to pork crackling! The boys loved it!”

“It is surprisingly tasty – I finish mine, my 13 month daughter has extra and even my husband eats all of his fairly quickly. When we told him what is was after, he wasn’t that bothered about eating insects. I can see that it would be a good way of getting vitamins etc into people, if they can get their heads around the idea. It was an interesting experience, so thank you very much!!”

“It was yummy and delicious.  I liked it a bit more than normal pasta. Lewis ate the whole portion and Finley even asked for more. We all enjoyed both the flavour and the texture.  Lewis even said that he <would definitely buy cricket pasta if it was on sale in the shops.>”

As a result of the overwhelming response and interest, Whizz Pop Bang has decided to attend The Times Cheltenham Science Festival in June 2016, promoting “Foods of the Future” and offer samplings of Cricket Pasta to the visitors and educating them on the nutritional and environmental benefits of this new frontier. As one mother put it, “I am interested in food from a health, taste and environmental angle and am always on the lookout for new products that I can feel more comfortable about eating”.

The next step is the second phase of taste trials, this time involving also a select few local schools in the UK that have expressed interest in becoming involved in the “Food of the Future” campaign as well as the edible insect revolution.

You may see some of the kids’ reactions to eating Cricket Pasta in the videos – the one below is a must-see!

Leave a reply Click here to cancel the reply